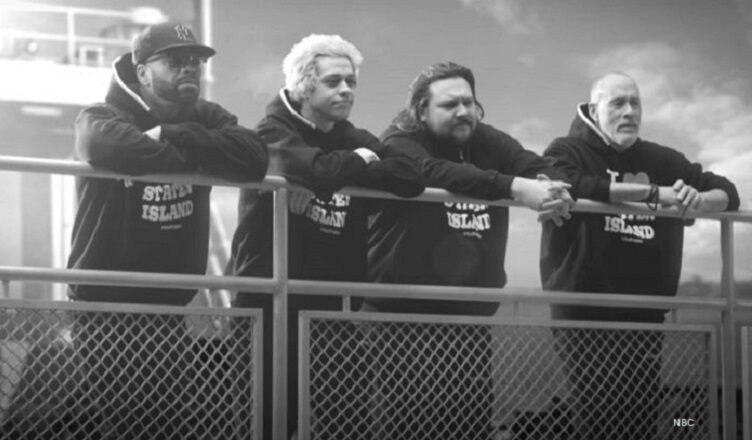 It’s not every day you see Method Man spitting a verse on Saturday Night Live.

The original Wu-Tang Clan member stopped by the NBC sketch series this weekend for a spoof video about life on Staten Island, where Wu-Tang was born.

The music video titled “Walking in Staten” featured SNL regular Pete Davidson — aka the King of Staten Island — paying tribute to his hometown with a side of mockery. The song is set to Marc Cohn’s 1991 hit single “Walking in Memphis.”

In the black and white video, Davidson wears an “I Love Staten Island” hoodie as he rides a ferry and sings about putting on his “bootleg Jordans,” before he “touched down in the land of Colin Jost and the legendary Wu-Tang.”

Rapper and vocalist Big Wet joins the track and sings “drive on by the garbage dump, so big you can see it from space.”

Davidson picks up the verse by mocking a few Staten Island staples — “we got like 80 bagel spots and every block has a pizza place.”

The video offers viewers a glimpse of life in the New York City borough, including wild turkeys, lots of cops, a small zoo, a cemetery and “a ton of pills.”

The clip cuts to Cohn refusing to take part in a parody of his own song, before being told it’s too late — he’s already in the video.

Cohn joins Davidson and Big Wet at a pizza joint, then the Grammy-winning musician takes a seat at a piano and continues the SNL version of his song.

“Staten Island where I’m walkin’, real is what I be talking … My Yankee hat a statement and middle finger to Boston. ”

Method Man is later asked, “Tell me, are you Italian?” The rapper responds, “Man, I am tonight!”

The track ends with the foursome welcoming everyone to Staten Island where “babies are born with a golden chain.”

Watch the video below.

By Anita Bennett / November 21, 2021 / 0 Comments
The box office numbers are in and King Richard suffered a devastating defeat to Ghostbusters: Afterlife. The Warner Bros. tennis drama is produced by and stars Will Smith as Venus and Serena Williams' father and coach, Richard Williams. The biopic...