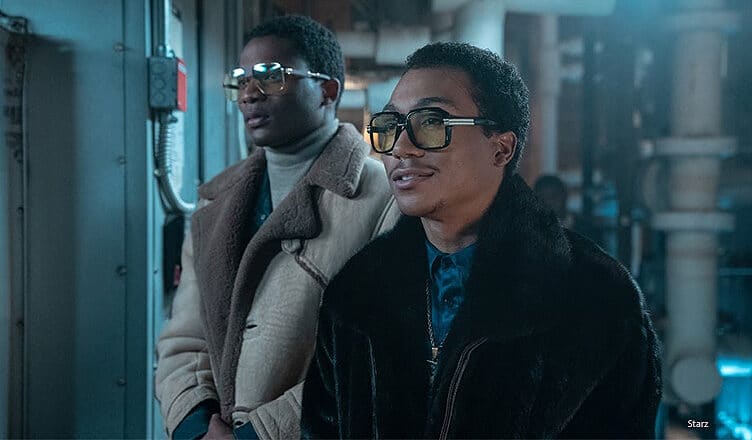 “If you look at season one, each episode to me, gets exponentially better. I can tell you season two is way better,” Huggins told Urban Hollywood 411 at his “backyard boogie” party on Nov. 20, in the View Park-Windsor Hills neighborhood of South Los Angeles.

The BMF producer and writer welcomed some of the show’s cast and crew to his home for an outdoor party and screening celebrating the series’ season one finale titled “The King of Detroit.” They were joined by Starz executive Kathryn Tyus-Adair, about 200 of Huggins’ friends, and a DJ spinning R&B and hip-hop hits.

Huggins said during our interview that his team will begin production on season two in February.

“We’ve already started writing. I’ve turned in the first four scripts,” he noted. “The word that I’m using to describe season two, compared to season one is ‘elevate.’ We’re elevating every aspect of our show, visually and storytelling. We have the same actors, and then a few surprises.”

BMF is inspired by the true story of Demetrius “Big Meech” Flenory and his brother, Terry “Southwest T” Flenory. The two siblings from inner-city Detroit joined forces as teenagers in the 1980s, to create the Black Mafia Family — one of the most prominent drug trafficking organizations in the U.S.

The series debuted on Sept. 26 in the U.S. and Canada and became the top premiere this year on Starz. Four days later, it was renewed for a second season.

While the drama is set in Detroit, Huggins told us most of it was shot outside the Motor City.

“I wanted to shoot the whole thing in Detroit, but they lost their tax incentives,” he explained. “So what we ended up doing was we went to Detroit for like six days… and we just tried to make sure we made Detroit a character the same way Baltimore was a character in The Wire, the same way Los Angeles is a character Snowfall. That was imperative being from Detroit.”

Without giving too much away about the season finale, Meech discovers a disturbing alliance. He comes up with a plan to eliminate the threat and two key characters are killed. When one character was gunned down by the person they least expected, the audience at Huggins’ party gasped.

The series is extremely popular and over the past two months it’s developed a loyal following.

“To generate the splash that it made, kind of caught me off guard with all the names and all of that stuff going on, on social media. But I put my blood, sweat and tears in it,” Huggins said.

He added that “Big Meech” is among the show’s fans.

“He loved it, he loved it,” Huggins said. “There are some things that, you know, he feels I should have gone left and I went right. But he respects what I do. And I respect him as a man. So it’s really a perfect partnership. Several people have tried to tell his story. So, to be the man who’s been entrusted to tell this story… it’s fantastic.”

The BMF season one finale premiered Sunday, Nov. 21 on Starz.