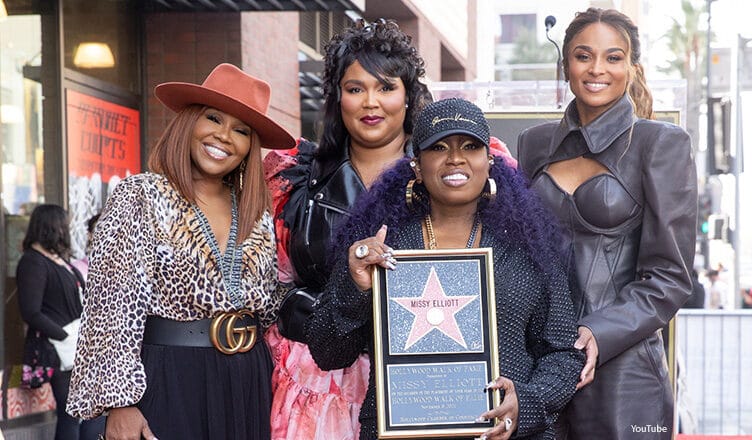 Missy Elliott took her place in Hollywood history on Monday, Nov. 8, when she received the 2,708th star on the Hollywood Walk of Fame.

The singer, songwriter, rapper, and producer was joined by longtime manager Mona Scott-Young, Ciara, and Lizzo.

After stepping up to the podium, Elliott said she remembered visiting Hollywood “20 some years ago, and just used to walk past all these stars and just imagine.”

The five-time Grammy winner also praised female rappers who came before her.

“I especially want to thank my sisters in hip hop” she said, “I love each and every one of y’all — the ones that’s poppin’ and the ones that’s about to be poppin,’” she said. Elliott then mentioned “the godmothers” of hip hop — Queen Latifah, Monie Love, Sha-Rock, Angie Stone, Roxannne Shanté, Yo-Yo, MC Lyte, and Salt-N-Pepa.

“I know I’m probably missing some,” she said. “But y’all are the backs that we stand on. Y’all are the foundation. Y’all ran so we could walk; y’all stood up for something so we could sit comfortably. So I thank y’all for this moment.”

The star was dedicated in the category of Recording in front of the new Amoeba Records store at 6212 Hollywood Boulevard.

“Missy Elliott has broken through the barriers of the male-dominated hip-hop world, and music industry as a whole, as she has led the way for many women who have followed in her footsteps,” Ana Martinez, Hollywood Walk of Fame Producer, said in a statement. “She continues to break barriers year after year and we’re thrilled to be able to honor her on the Walk of Fame.”

Elliott’s six studio albums have all been RIAA platinum-certified. In 2019, she became the first female rapper to receive the Michael Jackson Video Vanguard Award from MTV. That same year she was inducted into the Songwriters Hall of Fame.

Watch the star ceremony for Missy Elliott below.