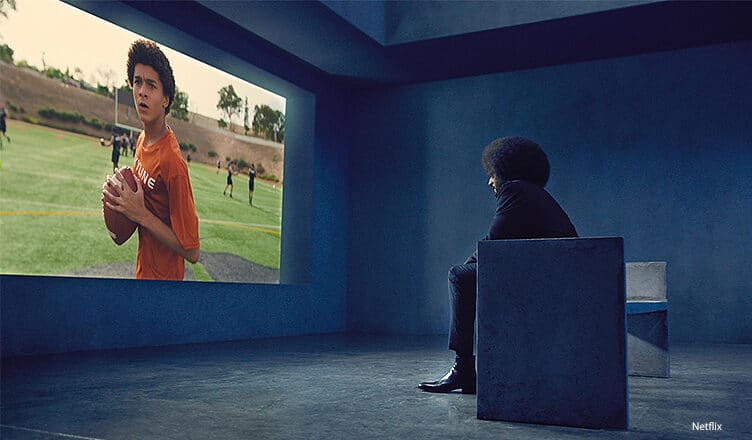 The six-episode series comes from Kaepernick and Emmy-winning filmmaker Ava DuVernay. One scene in particular sparked controversy when Kaepernick compared the NFL Draft combine to a slavery auction, with Black actors portraying slaves being paraded in front of White masters.

Culture critic, sports journalist and Blaze TV host Jason Whitlock tweeted: “Watched all 6 episodes of the Netflix Kaepernick series. Kap and Ava are too stupid to be embarrassed, but make no mistake, this series is absolutely embarrassing.”

Whitlock also uploaded a clip from his Blaze TV show to Twitter, and took a jab at the way Kaepernick portrayed his adoptive parents (played by Mary-Louise Parker and Nick Offerman). “This stuff feels Satanic. Two people adopt you and 30 years later, 32 years later, you put out a miniseries taking a dump on them?”

The way Colin Kaepernick portrayed his adoptive parents in his Netflix special is repulsive and wicked. pic.twitter.com/LKAW37sfbc

The series chronicles Kaepernick’s coming-of-age story, and examines the obstacles of race, class, and culture he faced as the Black adopted child of a White family. DuVernay directed the first episode and Kaepernick serves as narrator. Both are executive producers.

Former NFL player and Fox News opinion contributor Jack Brewer called the series “disgusting” during an appearance on Fox & Friends. “He has an evil, anti-American spirit and it’s sick and disgusting. One more thing. That even Netflix, someone that big and popular would even put something out like that, to penetrate the mind of these kids should be illegal.”

Brewer added, “This new Colin Kaepernick doctrine that’s penetrating the minds and hearts of so many of our underserved Black kids across America is the single largest threat to Black men in the United States of America because right now folks are thinking that they’re victims.”

Lavern Spicer, a Black conservative running for Congress, added on Twitter Tuesday: “If Kaepernick really believes NFL recruiting is like a slave auction, why did he CRY and TRY so hard to be accepted by them? #SourGrapes”