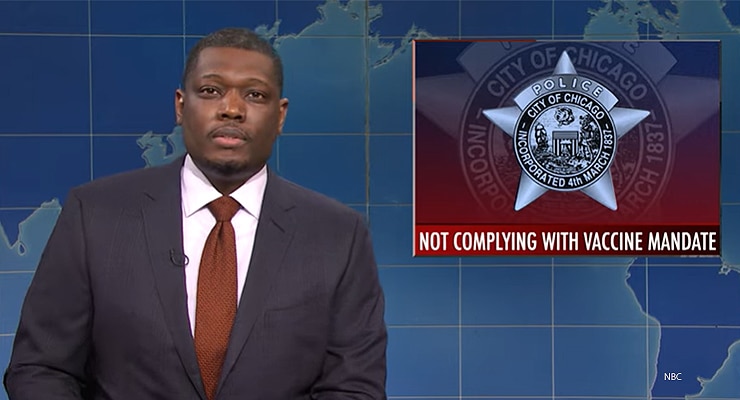 The showdown in Chicago over a mayoral mandate requiring public employees to report their COVID-19 vaccine status made it onto Saturday Night Live.

SNL comic Michael Che found the standoff laughable and called the union leader out on the “Weekend Update” segment.

“The head of Chicago’s police union is urging officers to defy the city’s vaccine mandate, which is weird because usually Chicago police can’t wait to take the shot,” Che said to laughter.

Given the tough talk in Chicago over the last few days, there’s a good chance Mette will fire back at Che for suggesting the city’s cops are trigger happy.

Like the comedian, the union leader has a way with words. In a video posted to Facebook on Oct. 20, Mette took aim at city hall and compared the vaccine battle to a dystopian fight to the death.

“All right everybody, welcome to day three of the ‘Hunger Games,’” he said.

“From the beginning, it’s always been a tyrannical order, ‘It’s this or else,’” he insisted. “Well, I’ve said it in the past, I’m choosing the ‘or else.’”

According to WGN-TV, 21 Chicago cops were sent home and placed on “no-pay status” last week for refusing to comply with the order to enter their vaccination status into the city’s online portal.

Despite the threat of losing pay, Mette warned younger officers to stand their ground. “For all you young coppers out there, you’ve got a long ways to go,” he said, “and don’t think it can’t get worse.”

Watch SNL‘s take on the situation below.