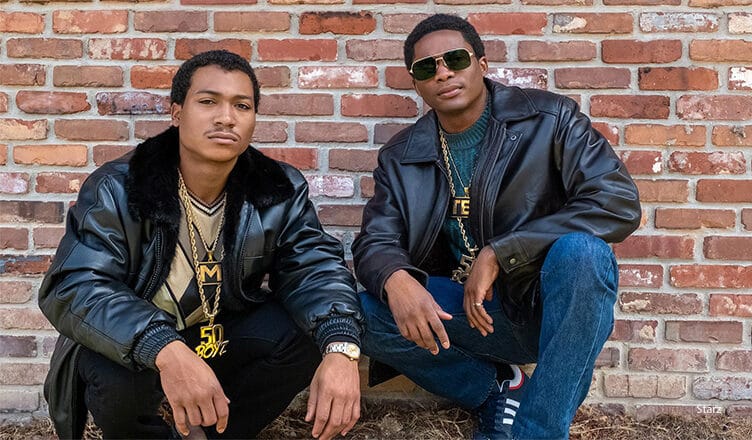 Demetrius “Lil Meech” Flenory Jr. admits he had doubts about playing his father, Demetrius “Big Meech” Flenory, in the new Starz series BMF. But one person believed the aspiring actor had what it took for the role, and that was executive producer Curtis “50 Cent” Jackson.

“Fifty actually took me, put me in acting classes and believed in me before anybody did, before I believed in myself,” Demetrius said last month during a press junket at the virtual convention for the National Association of Black Journalists.

“He always knew I was the one for the role. He always told me ‘there’s nobody else but you,’ even when I doubted myself,” Demetrius said about 50 Cent. “So just all the acting classes [I took], the intense work I had to put in, the work to get the job, it made me love it even more.”

[Watch the interview below]

Despite his family connection to the show’s central character, Lil Meech added, “I had to really earn my spot. ”

BMF is inspired by the true story of Big Meech and his brother, Terry “Southwest T” Flenory. The two teens from inner-city Detroit combined their bravado and brains in the 1980s to create the Black Mafia Family, which would become one of the most prominent drug trafficking organizations in the U.S.

In real life, the Black Mafia Family expanded their business dealings in Atlanta, Los Angeles and into the music industry before they were ultimately taken down by the feds.

BMF is created and written by Power producer Randy Huggins, who grew up in Detroit and knew the story of the Flenory brothers well.

“They’re probably the biggest urban street lords to ever make it out of Detroit,” Huggins said via Zoom. “Their name is synonymous with Detroit. It was an honor and a privilege to bring this story to life, especially being a son of Detroit, and especially because me and Terry aren’t but a couple years apart.”

While the series is not a carbon copy of what happened in real life, Huggins noted much of it is based on real events.

“I took some liberties, but everything there is based on a story,” he said. “Obviously, you can’t have people’s names in there. Obviously, some of the places may have changed. But, I don’t think there’s a character in there that I hadn’t heard of.”

The series centers heavily on the belief in family loyalty, and the anything it takes attitude in the pursuit of wealth and the American dream.

BMF premieres Sunday, Sept. 26 at 9 PM ET/PT on Starz in the U.S. and Canada, and across all Starz platforms worldwide.

Watch the interview with Demetrius “Lil Meech” Flenory Jr. below.

By Anita Bennett / November 21, 2021 / 0 Comments
The box office numbers are in and King Richard suffered a devastating defeat to Ghostbusters: Afterlife. The Warner Bros. tennis drama is produced by and stars Will Smith as Venus and Serena Williams' father and coach, Richard Williams. The biopic...