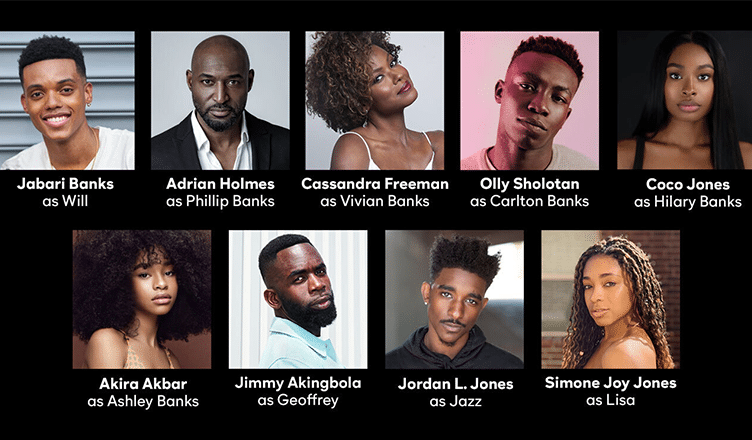 “Oh my god, Carlton!” Carlton and the rest of the Bel-Air group have been cast for Peacock’s upcoming reimagining of the Fresh Prince of Bel-Air.

The streaming platform introduced the series regulars for Bel-Air Tuesday in a press release.

Co-starring alongside previously announced star Jabari Banks are Adrian Holmes as Phillip Banks (At That Age, V Wars); Cassandra Freeman as Vivian Banks (The Enemy Within, Atlanta); Olly Sholotan as Carlton Banks (Run Hide Fight, Evolution of Nate Gibson); Coco Jones as Hilary Banks (Let it Shine, Vampires vs. The Bronx); Akira Akbar as Ashley Banks (We Can Be Heroes, Captain Marvel); Jimmy Akingbola as Geoffrey (Most Dangerous Game, In The Long Run); Jordan L. Jones as Jazz (Rel, Snowfall); and Simone Joy Jones as Lisa (The Chair, What If).

The one-hour drama series has already been ordered for two seasons.

As previously reported, Bel-Air is a modern-day dramatic take on the original series, which ended its six-season run in 1996.

Bel-Air will dive deeper into conflicts, emotions and biases as Will moves from West Philadelphia to the affluent enclave of Bel-Air in Los Angeles.

The reimagined drama came as a result of a viral trailer uploaded to YouTube in 2019, by cinematographer Morgan Cooper, which saw the Fresh Prince get a grittier backstory set in the present day.