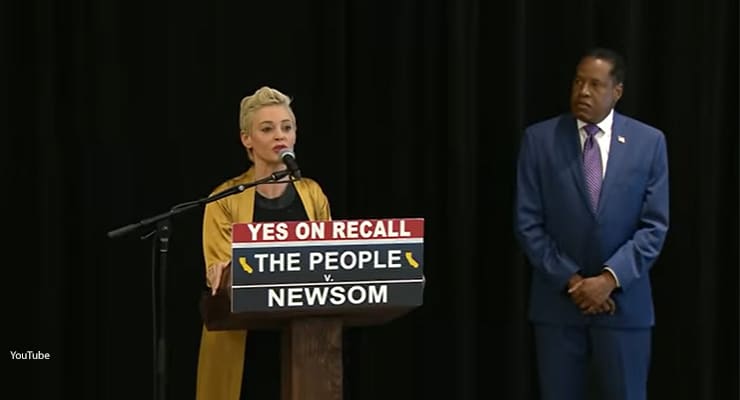 Rose McGowan called out the state of California, the Democratic Party and the Black Lives Matter movement Sunday at a campaign event in Los Angeles for Republican gubernatorial candidate Larry Elder.

The actress and activist stood alongside Elder as he argued the U.S. is the world’s “least racist” country. Elder, who is African American, took aim at “race hustler” Al Sharpton, Black activists, and Democrats for supporting critical race theory and reparations, which he described as “the extraction of money from people who were never slave owners to give to people who were never slaves.”

She warned White people who support Black Lives Matter — Elder “might know more than you.”

The Charmed star told the crowd she now lives in a “jungle” in Mexico, and said she’s done with the Democratic party.

“It gives me no great pleasure to call out Democrats. I was a Democrat,” McGowan said.

She talked about being blacklisted in Hollywood after going public with her sexual assault allegations against disgraced mogul Harvey Weinstein. She also repeated her claim that California Gov. Gavin Newsom’s wife, Jennifer Siebel Newsom, tried to persuade her to remain silent about Weinstein.

In a statement to Business Insider, a spokesperson for Siebel Newsom called McGowan’s claim a “complete fabrication.”

“It’s disappointing but not surprising to see political opponents launch these false attacks just days before the election,” the statement said.

As for Elder, McGowan said she doesn’t agree with him on every policy issue, but called him “the better candidate and the better man.”

Elder leads the field of Republican candidates to become the next governor of California if Newsom is voted out of office in Tuesday’s recall election. A win would make Elder the state’s first Black governor.

Although he faces a tough challenge with the latest polls saying Newsom will likely prevail. The governor is getting support from political heavy hitters, including Vice President Kamala Harris, who returned to the Golden State last week to stump for Newsom.

Meanwhile, President Joe Biden arrives in Southern California on Monday evening to join Newsom in Long Beach at the “final rally” against the recall effort.

Mail-in voting has been underway for several weeks. The last day to vote in the recall election is Tuesday, Sept. 14.

.@rosemcgowan endorses @larryelder & accuses of @JenSiebelNewsom of once calling her on behalf of Harvey Weinstein’s attorneys. @GavinNewsom: “these allegations are outrageous and false.”