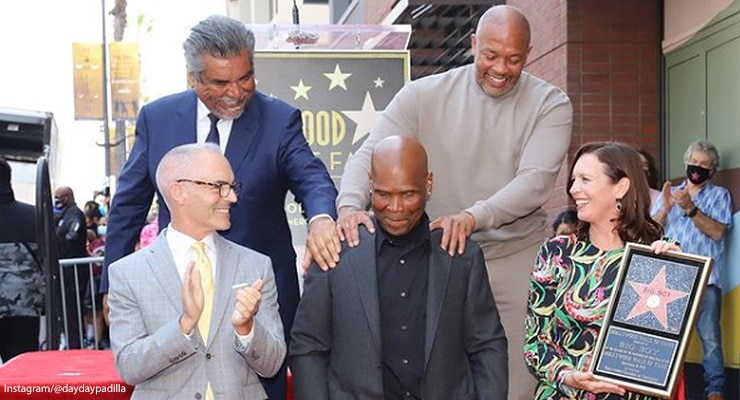 Real 92.3 radio personality Kurt “Big Boy” Alexander got emotional Wednesday on the Hollywood Walk of Fame as his star was unveiled.

The radio legend shed tears while discussing his late mother Ida and the difficulties his family faced when they were homeless. He said he later bought his mom a house so she would never be evicted again.

Big Boy was born in Chicago and moved to California with his family when he was just two years old. During the star ceremony, he recalled visiting the Walk of Fame as a kid and having to walk home across town to West Los Angeles “because we didn’t have enough money to catch the bus to get home.”

The iconic media personality was recognized on the Walk of Fame on his 52nd birthday.

Big Boy got his start by DJing parties, and later became a bodyguard for a group called The Pharcyde. He befriended the Baka Boyz, the morning show hosts at Power 106 and was offered a hosting position with the station.

He seized the opportunity and built a growing fan base in the night and afternoon hosting slots. He later broke onto the national spotlight as the announcer on “Vibe TV Talkshow,” while simultaneously hosting his popular morning radio show on Power 106. He continued with Power for just over 20 years, before jumping to iHeart Media’s Real 92.3.

The radio personality is now the host of “Big Boy’s” Neighborhood” in Los Angeles. His radio show and brand have continued to grow and now airs in nationwide syndication on Premiere Radio Network and daily on Fuse television.

Living in L.A., naturally Big Boy has appeared on screen as well. He’s had cameos in Adam Sandler’s The Longest Yard, Charlie’s Angels 2, and he co-starred in Deuce Bigelow: Male Gigolo. He also served as a fill-in host on CBS’ The Talk, appeared on E!’s Keeping Up With The Kardashians and HBO’s Entourage.

Wednesday’s ceremony marked the 2,701st star unveiled on the Walk of Fame.