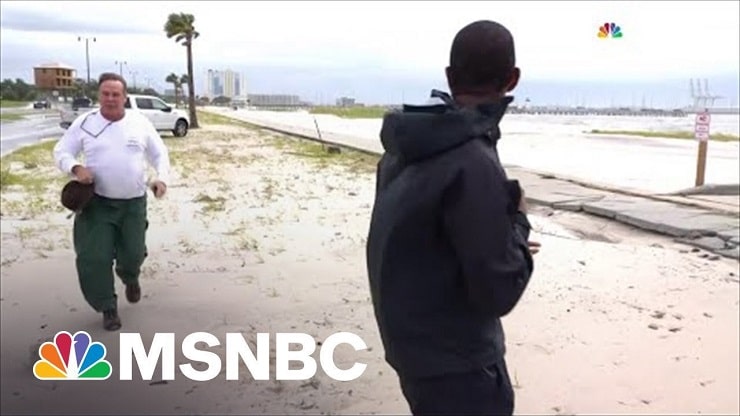 An Ohio man is in custody after he allegedly attacked an MSNBC reporter on live TV earlier this week in Gulfport, Mississippi.

U.S. Marshals arrested Benjamin Dagley on Thursday at a shopping plaza in Dayton, Ohio, the agency said in a news release.

Authorities spotted Dagley’s white pickup truck in the parking lot of the mall, and took him into custody when he walked out of a store.

“Due to assistance provided by the Wayne County Sheriff’s Office, our task force members were able to track this fugitive from Mississippi to his arrest location in Dayton. This violent fugitive was attempting to flee from his charges in Gulfport but the swift work of our task force members resulted in a timely arrest,” U.S. Marshal Pete Elliott said in a statement.

Dagley was wanted in Mississippi on suspicion of assault. His arrest came after he allegedly attacked MSNBC correspondent Shaquille Brewster Monday as he did a live report in Gulfport on the aftermath of Hurricane Ida.

In a viral video, a man was seen jumping out of a white pickup and running toward the camera while Brewster reported on the hurricane. The man lunged at Brewster’s face while angrily shouting “cover this accurately!” Brewster was not seriously injured.

On Tuesday, the Gulfport Police Department announced investigators had identified the suspect as Benjamin Eugene Dagley of Wooster, Ohio.

Police put out a call for information on the suspect and said tips from the public helped officers identify Dagley.

An arrest warrant was issued charging Dagley with two counts of simple assault, one count of disturbing the peace and one count of violation of emergency curfew, police said.

At the time of the incident, Dagley was on probation for a previous charge in Ohio. One of the conditions of his probation was a restriction on travel.

By Jacquelinne Mejia / November 5, 2021 / 0 Comments
Janet Hubert has shared details on how things are going with Will Smith after the two ended their years-long feud on HBO Max's The Fresh Prince of Bel-Air Reunion. In a new interview, the actress who played the original Aunt...
%d bloggers like this: