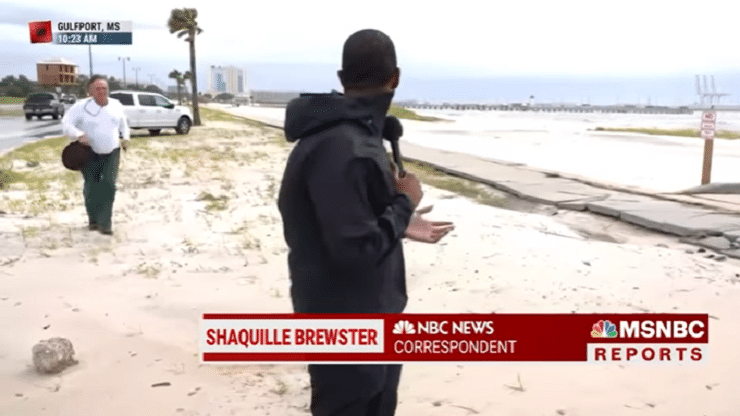 Police in Gulfport, Mississippi are apparently closer to nabbing the man who attacked an MSNBC reporter on live TV.

Related Story: CNN Reporter Gets Cursed Out on Live TV During Protest

Dagley was in the Gulfport area Monday morning and allegedly attacked NBC News correspondent Shaquille Brewster as he did a live report on the aftermath of Hurricane Ida.

In a viral video, a man is seen hopping out of a white pickup truck and running toward the camera while Brewster does a live report from an empty beach. The man lunges at Brewster’s face while angrily shouting “cover this accurately!”

Brewster took to Twitter after the terrifying encounter to say he was OK, writing: “Appreciate the concern guys. The team and I are all good!”

We would like to thank the public for coming forward and helping identify Dagley. pic.twitter.com/SFPJAekshn

Local authorities put out a call for help identifying the suspect whose picture has now been seen around the world.

An arrest warrant was issued for Dagley, charging him with two counts of simple assault, one count of disturbing the peace and one count of violation of emergency curfew, police said in a news release posted on Twitter.

Dagley is currently on probation for a previous charge in Ohio, according to Gulfport police. One of the conditions of his probation is a restriction on travel. Gulfport police said they’ve been in touch with probation officials in Ohio to let them know Dagley allegedly crossed state lines.

Authorities say Dagley left the Mississippi Gulf Coast and is believed to be traveling in a white 2016 Ford F150 with an Ohio license plate.