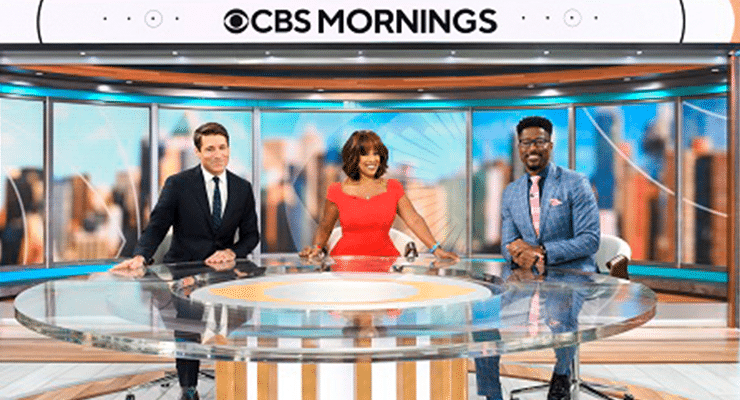 CBS is rebranding its morning news program for a re-launch on Tuesday, Sept. 7.

Gone will be CBS This Morning for a rebranded show called CBS Mornings, the network announced Tuesday. Along with the new name, the reimagined show is welcoming new co-host Nate Burleson, who takes a seat at the anchor desk alongside Gayle King and Tony Dokoupil.

The show will also move to a state-of-the-art studio in Times Square.

CBS Mornings will air Monday-Friday, with its first hour at 7 a.m. ET focusing on hard news and more feature reporting with live interviews for its 8 a.m. hour. The 8 a.m. hour will also include topics from news, sports, climate, and technology to race, health, parenting and personal finance. Anthony Mason will continue to contribute arts and culture pieces, while Vlad Duthiers delivers his regular feature “What to Watch” from the new studio.

“CBS Mornings won’t shy away from complicated topics or uplifting moments. Come September, the energy of our new anchor team will bring all of this together to help viewers understand and engage with their world,” Shawna Thomas, executive producer of CBS Mornings, said in a statement.

The show will be overseen by Neeraj Khemlani, president and co-head of CBS News and Stations.

“All CBS News morning broadcasts will now be part of the same family, with a focus on original reporting and exquisite storytelling, connected by the sound of the iconic trumpet music and an ethos of optimism that carries all the way through to the sunshine logo itself,” said Khemlani. “We’re adding a little bit of CBS Sunday Morning – every morning – on CBS Mornings.”