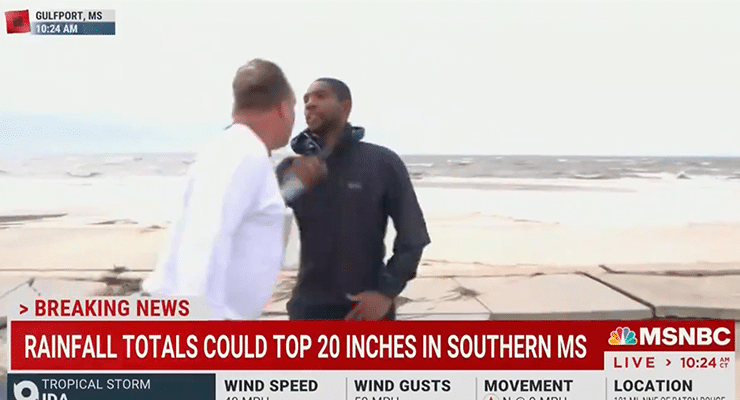 MSNBC reporter Shaquille Brewster was accosted during a live shot Monday while reporting in Gulfport, Mississippi on the aftermath of Hurricane Ida.

In a video of the incident, a man jumped out of a white pickup truck while Brewster was reporting from the scene and speaking live with anchor Craig Melvin.

[Watch the video below]

As Brewster begins his report, a pickup can be seen parking in the sand several yards from where the news crew is standing.

When the man starts running toward the camera, Brewster walks backward and says, “I’m going to turn this way because you know, we deal with some people every once in awhile.”

The man then starts shouting angrily, “Cover this accurately!”

Brewster says, “Craig, I’m going to toss it back to you because we have a person who needs a little help right now,” as the man lunges at his face.

Melvin then says from the anchor desk, “Hey, hey, hey, hey, hey – we’re going to check in with Shaq Brewster just to make sure all is well. There’s a lot of crazy out there.”

Later in the broadcast, Melvin assured viewers that after being “disrupted by some wacky guy” Brewster was “doing just fine.”

Brewster tweeted about the incident to say he was OK—“Appreciate the concern guys. The team and I are all good!”

Social media users also expressed concern over other journalists out in the field who are covering Ida’s destruction, including the Today show’s Al Roker.

Roker tweeted a video of himself dumping murky water out of his rain boots in his hotel room tub and wrote, “For all those who were worried about me out on #lakepontchartrain covering #Ida a) I volunteered to do this. Part of the job. b) My crew and I were safe and we are back at our hotel and c) for those who think I’m too old to be doing this, try and keep up.”

For all those who were worried about me out on #lakepontchartrain covering #Ida a) I volunteered to do this. Part of the job. b) My crew and I were safe and we are back at our hotel and c) for those who think I’m too old to to be doing this, try and keep up pic.twitter.com/DctJBFKD0D

According to published reports, Hurricane Ida left 1 million people in Louisiana without power Monday afternoon and the National Guard has rescued 200 people around the New Orleans area.