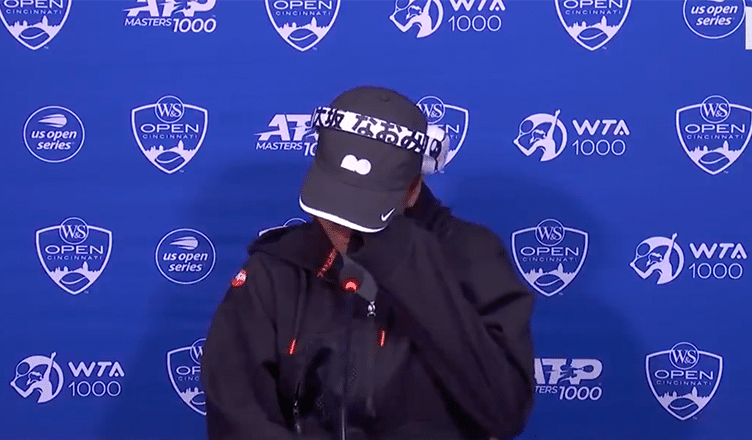 Naomi Osaka wiped away tears and stepped away from the podium to take a break during a press conference Monday for the Western & Southern Open in Cincinnati.

According to freelance New York Times reporter Ben Rothenberg, who was live tweeting from the gathering, the 23-year-old tennis champion was asked a “fairly aggressively toned question about how she benefits from a high-media profile but doesn’t like talking to media.”

Four Qs or so went smoothly, Naomi was doing well.

Then someone from Cincinnati Enquirer asked her a fairly aggressively toned question about how she benefits from a high-media profile but doesn't like talking to media. Osaka tried to engage, but after her answer began crying.

The journalist who asked the question according to a clip from the press conference was Paul Daugherty, a sports columnist at the Cincinnati Enquirer.

Daugherty asked, “You’re not crazy about dealing with us [the media], especially in this format. Yet you have a lot of outside interests that are served by having a media platform. I guess my question is, how do you balance the two?”

Osaka then asked him to clarify his question before she started answering. As she took her next question from another journalist, she became visibly tearful and stepped away from the press conference to collect herself before eventually returning back to answer the remaining questions.

TMZ reports Osaka’s agent Stuart Duguid called out the reporter in a statement “The bully at the Cincinnati Enquirer is the epitome of why player/media relations are so fraught right now. Everyone on that Zoom will agree that his tone was all wrong and his sole purpose was to intimidate. Really appalling behavior.”

So far, Daugherty has not tweeted about the incident.

This was the first press conference the Grand Slam winner spoke at since pulling out of the French Open in May after she refused to speak to the media citing mental health concerns.

Watch a clip from Monday’s press conference below.