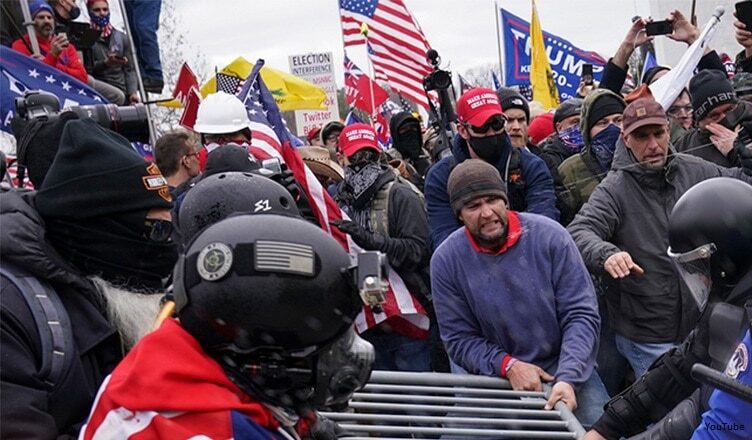 In a sight not seen in modern U.S. history, a violent mob of pro-Trump rioters stormed the U.S. Capitol in Washington, D.C., during Wednesday’s formal counting of electoral votes to certify President-elect Joe Biden’s election win.

A woman was shot and killed by police inside the Capitol, and three other people died after suffering medical emergencies, according to the Associated Press. To help restore order, Washington Mayor Muriel Bowser imposed a curfew from 6 p.m. until 6 a.m. Thursday morning.

In another development, Twitter locked President Trump’s account for 12 hours and warned it could permanently ban him from the platform because his posts about the unrest violated its guidelines. According to CNN, Facebook also blocked Trump from posting for 24 hours, following the removal of a video he shared of the rioters.

The insurrection stunned the nation and prompted many actors, athletes and Hollywood insiders to condemn Trump and express their sadness.

Comedian Kathy Griffin took to Twitter to comment on the protesters breaching the Capitol building, writing: “They’re inside. #TrumpCult. NOT BLM, NOT ‘antifa.'”

Orange Is the New Black alum Uzo Aduba tweeted: “This is not over. And the blame sits squarely in the hands of this current President, his supporters, and all who have helped prop him up.”

Former Miami Heat star Dwyane Wade commented on a retweet of a social media user who asked why an initial request for the National Guard at the Capitol was denied by the Department of Defense.

Wade tweeted: “Of course it was. Those people are not Black.”

Filmmaker Ava DuVernay commented on a video she retweeted of White rioters recreating the death of George Floyd on the steps of the National Capitol City Church: “The language of white supremacy is a language of cowardice disguised as dominance.”

Earlier in the day at a rally, CNBC reported President Trump incited the violence by telling a crowd of supporters he refused to admit defeat to Biden.

After the situation got out of control, Trump addressed the rioters in televised comments and told them to “go home.”

Shortly after 8 p.m. ET, lawmakers reconvened to count the electoral college votes and condemned the acts of the pro-Trump rioters. Senators voted 92-7 to reject the GOP challenge to Biden’s win in Pennsylvania.

Senate Minority Leader Chuck Schumer called for the “thugs” and “domestic terrorists” who stormed the Capitol to be “prosecuted to the full extent of the law.”

Watch some of CNN’s coverage of the violence below: