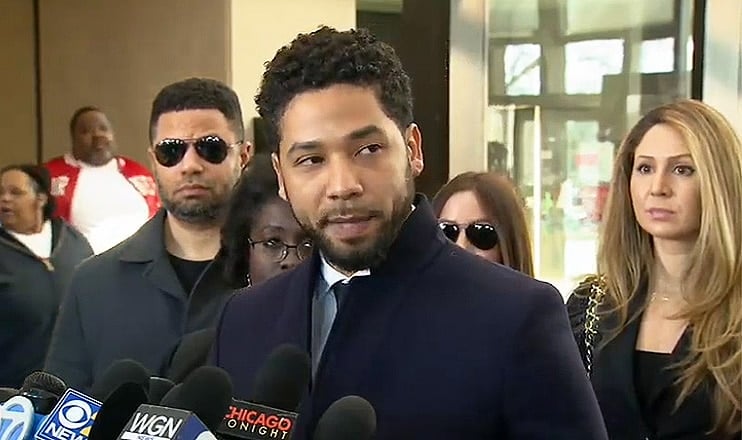 Jussie Smollett’s legal troubles are front page news once again. The former Empire actor was indicted Tuesday in Chicago by a special prosecutor in connection with his alleged hate crime attack.

In a statement to ABC7 Chicago, special prosecutor Dan Webb said a Cook County grand jury returned a six-count indictment against Smollett for allegedly making four separate false reports to Chicago police “related to his false claims that he was the victim of a hate crime.”

The actor is scheduled to be arraigned on Feb. 24. This latest turn came after charges were dropped last year against Smollett for allegedly staging a racist and anti-gay attack on Jan. 29, 2019.

Smollett told Chicago police officers he was walking down a city street in the dark, when two masked men approached him and began yelling racial and homophobic slurs. The actor said the suspects beat him, wrapped a rope around his neck, doused him with a chemical and said “this is MAGA country.”

Following a lengthy investigation, police alleged that Smollett orchestrated the attack in hopes of getting a salary bump on Empire, and said he hired siblings Abimbola “Abel” and Olabinjo “Ola” Osundairo to carry out the assault.

The brothers flipped after questioning and claimed Smollett paid them $3,500 to stage the entire ordeal.

Prosecutors charged the actor with 16 felony counts of disorderly conduct for allegedly filing a false
police report. Smollett maintained his innocence and pleaded not guilty. In a surprise move on March 26, the state’s attorney’s office dropped all charges.

In April 2019, thousands of text messages and emails about the investigation were released after the Chicago Tribune submitted a Freedom of Information Act request.

In the texts, Cook County State’s Attorney Kim Foxx — who recused herself from the case in February 2019 — complained that the 16 charges brought against Smollett were excessive. Foxx faced intense criticism when the charges against Smollett were dropped, and was later forced to defend the decision by her office.

Amid public outcry, a judge appointed Webb as special prosecutor to investigate Foxx’s handling of the case, and decide if Smollett should face additional charges.

Meanwhile, Chicago city leaders filed a $130,000 lawsuit against the actor to recover the costs of investigating the alleged hoax.

As actor faced his legal troubles, his character Jamal Lyon was written out of the final episodes on Season 5 of Empire. He was not asked to return for the show’s sixth and final season.

By Frances Price / November 14, 2021 / 0 Comments
While the nation waits to find out what the jury will decide in the Kyle Rittenhouse homicide trial, Saturday Night Live took a closer look at the case and the role white privilege may ultimately play in the verdict. Rittenhouse,...
%d bloggers like this: