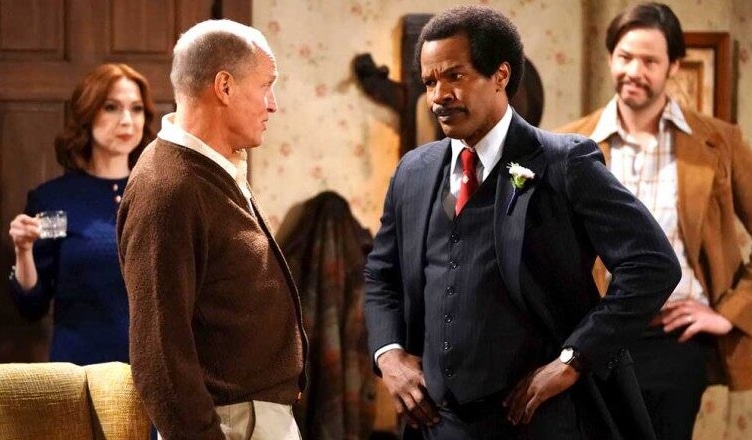 ABC is movin’ on up in the ratings thanks to the network’s critically acclaimed remakes of The Jeffersons and All in the Family.

An average of 10.36 million viewers tuned in to the network’s primetime special,  Live In Front Of A Studio Audience: Norman Lear’s ‘All in the Family’ and ‘The Jeffersons’ on Wednesday night, scoring a 1.7 rating among adults 18-49.

The figure is “double ABC’s average viewership for the time period this season” and a “roughly 50 percent bump in the 18-49 demographic,” according to The Hollywood Reporter.

Additionally, the special marked a six-month high for the network in the 90-minute Wednesday time slot, while ABC had its best season-closing since 2007.

The remakes also scored favorably among critics, with many praising Jennifer Hudson’s performance of the classic theme song, “Movin’ on Up,” and  Woody Harrelson and Marisa Tomei’s rendition of “Those Were the Days.”

Others enjoyed the special’s surprise cameos, including Marla Gibbs’ reprisal of her role as The Jeffersons‘ maid Florence Johnston, 44 years after the original series debuted in 1975.

The cameo came when George and Louise Jefferson — played by Jamie Foxx and Wanda Sykes — welcomed Florence into their home to interview for a job as their maid.

Fans continued to talk about the unexpected appearance on Thursday, with one viewer writing: “Seeing Marla Gibbs reprise her role as Florence in the #jeffersonslive special made me a little emotional … The entire cast was awesome.”

View all posts by Gillian Walters →

2 thoughts on “‘The Jeffersons’ Remake Scores Big Ratings for ABC”

By Frances Price / November 16, 2021 / 0 Comments
DJ Cassidy will mark the 2021 Soul Train Awards with a special edition of  "Pass the Mic" featuring music stars from the 1970s and '80s. In celebration of the award show's 50th anniversary, "DJ Cassidy's Pass The Mic: BET Soul...
%d bloggers like this: